I’m no animation or film student. I’m not even really an art student, and so I was stunned- and excited- to discover that most films, even mainstream live action films, employ storyboard artists to sketch out scenes. They’re kept hidden away so as not to take away from the reputation of the director as the ‘visualizer’ of the story, but these artists draw hundreds of frames, sketching out the movement of the camera.

By orienting myself within a context, informed by an- admittedly vague- awareness of what visuals were to follow and what was to happen, my sketches became so functional that I forgot about being precious with my pencil marks. Moreover, drawing within small panels (barely 3 x 2 inches) forced me to consider the overall composition, background elements, and what to include in the frame in order to convey the moment. It also forced me to conceptualize the setting and the characters’ bodies as real things- when the camera angle changes from the POV of a character to that character’s face, the angle is inversed. You have to remember that the light is now coming in from the other side, and so all the shadows will fall the other way. It’s a nice challenge, especially in such a tiny space. It also forces you to think and change tack rapidly- you are, after all, sketching the tracks of a camera lens. 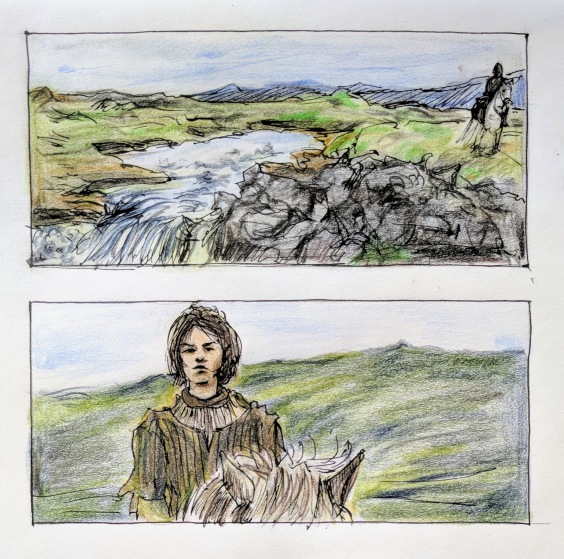 It was only a short little exercise, but one I enjoyed so much that it kept me glued to my chair for a few minutes and forget about everything else. It made me seriously reconsider my (lack of) interest in comic books and graphic novels. I simply don’t like the art style in most of them, but there’s no denying that the potential for narrative storytelling is immense. I will keep returning to this exercise when I’m in a rut or am feeling intimidated by details.